This was our first Unity project in DBGA. The assignment was to make a 2d game on some kind of grid and featuring a turn mechanic.
The game is a competitive turn based strategy game. In this game each player controls a king plus a team of five soldiers, chosen from a pool of five classes. The goal is to kill the enemy king or to bring him to the other side of the battlefield. 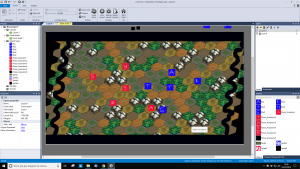 The constraints given us were that the game had to be turn based and on some kind of grid. The only pillar we established ourselves was that we wanted a contained experience with a lot of replayability. Once we ruled out procedural generation we decided to go for a competitive experience: a 5v5 deathmatch. After we finished the concept phase and we pitched (ita) it to our teachers we started testing with a”paper” prototype.

We wanted to make an actual paper prototype but, I can’t remember why, we instead made it with construct; not a working prototype just a background with some pawns to drag around with the editor. With this we were able to test our idea right away and we started tuning it in a matter of days.
We realized that a deathmatch would easily lead to a stall where the first to attack would be at a disadvantage. This led to two new mechanics: the king and the special abilities.
The king is a special pawn that if killed loses you the game, if brought to the other side of the battlefield wins you the game. This mechanic brought to the game some strategic depth and more choices in the overall game plan. For example now sacrificing your pawns is a legit strategy, while in a deathmatch that would just bring you closer to defeat.

Although there is something to be said on the fact that the special abilities would not cancel the standoff situations in a game of perfect information, the sheer number of possible scenarios they allow makes it practically impossible to calculate the outcome. The result of this is that player would break the standoffs with an ability just because they had a “good hunch”. One side effect of the abilities was also that it complimented the “flavor” of the game.
The last mechanic we added in the prototype was that certain classes would gain stat bonuses if standing on certain types of tile.
Finally this lead us to the spreadsheet on the right (pardon my italian), which describes the systems in the game and how the various classes interact with each other.

This first draft for the UI (ita) of the game features a dual HUD, one for each player, and each part is visible only on the player’s turn. We eventually scrapped the idea and kept only the basics of the first draft.
The panels show important information of the selected pawn while on the battlefield each pawn has two numbers on its tile. These numbers are health and attack, and on top of them there are the buffs, if they’re applied.
The main issue we had with the UI was finding the appropriate level of detail and contrast of the underlying tiles. We struggled with the problem for quite some time and eventually settled on the last version of said tiles, featured in the final game.

If you want to understand the rules of the game I made this presentation (eng) explaining them. An adaptation of these slides was also featured in the pause menu and start menu of the game.