For my first Game A Week I made a game where you control one small light in a pitch dark environment. Your light is slowly fading and you must reach the end of this labyrinthic environment without it going out. Don’t Fade.

The controls are WASD to move and Mouse for the camera, in addition to that you can hold Space to hover over small gaps, but doing so will make your light run out faster.
if you run into issues with the mouse tracking, you can go full screen if you hover the mouse over the bottom part of the game window.

Further spoilery explanations: yellow lights will slowly brighten your light to a point (and are also checkpoints); blue lights will brighten you only a bit; red lights are enemies and will drain your light. Also sorry for the lighting artifacts, but I didn’t have time to fix them properly. There shouldn’t be any bugs… probably I din’t look hard enough.

Many times I’ve heard that you must focus on having a playable prototype to test your gameplay as soon as possible, especially if you only have a short time to make a game. Well, for this seven day project actual gameplay appeared only around day 4. Usually I’m the first to push for a solid gameplay before everything else, but this time, after a whole day banging my head on the desk to come up with an idea, all I was able to find was this “concept” of a lonely light in the darkness exploring some kind of ruins. But no gameplay. So instead of coming up with the gameplay, I spent the rest of the day researching all I could on Unity’s rendering pipelines and post-processing, in hope of finding something that could bring Unity closer to the image that I had in mind (by the way, I didn’t have time to put post processing in the game after all).

The gameplay finally came to me after spending 3 days building assets with Unity primitives and fiddling with the settings of the player and the camera. So you control this light that is slowly fading and to stay alive you have to collect other smaller lights or “refuel” in the check points. Now, as soon as I thought of this I knew it could work.
With this I found instantly the game loop:

After this solid base I decided to also add the red enemies if I had time. The for the enemies I made a simple patrol behavior and if the player enters the area they patrol they chase him until he gets out of said area.
Unfortunately since I didn’t do “gameplay first” I had to crunch the last 3 days.

For the level design my initial idea was to divide the game into five distinct chunks but due to the nature of the game and the amount of checkpoints I had to use, it came to feel more like a continuous labyrinth. There are still distinguishable sections though:

The style of the assets was fortunately part of the initial idea: I was going to build some kind of ruin using only cubes of two colors, white and brown. These cubes would form the tiles of the floor which gave me the chance to misplace and rearrange them to form three somewhat distinct style: partially ruined found in the beginning, crumbling ruins for the middle section, and not ruined for the end section. I would later use the same cubes for a few props.

I also thought to squeeze in a bit of environmental story-telling. I already spoke of the three kind of environments, but I also borrowed, unintentionally, from The Hero’s Journey and the actual Journey (I wrote an essay linking the two, sometime ago), hopefully it shines through.

To put it simply: after the “tutorial” you descend in the lower levels (Belly of the Whale), then there’s the labyrinth (the Road of Trials) and a small set piece with one bonfire surrounded by four dimmer bonfires (Meeting with the Goddess), this is also the last bonfire you’ll find; then the hall filled with enemies (Atonement with the Father) and the staircase and the white door (Apotheosis and the Ultimate Boon). 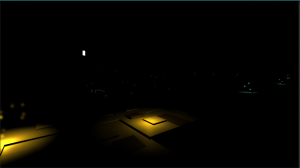 The sight from the start of the game

Top view of the entire level

The last hall as seen in game

A view of the entire layout of the temple