For my second GameAWeek I made this simple tower building game, I thought to leave physics enabled, I think it gives a whimsical feeling to the whole. Unfortunately I wasn’t able to put much time into it, only the weekend in fact, but I’m pretty satisfied with the result, given the circumstances.

The rules are pretty simple: release the blocks by left clicking, the score goes up for every block placed successfully on top of the previous one, if a block falls or if the tower crumbles it’s game over.
Try and build the highest tower in the neighborhood!

Initially the idea was to have the blocks dangling from a chain, but (probably) it implied using the joint components which I never used before, and since I was basically out of time I relied on the power of maths(!) and managed the movement entirely via script: it results in a more abstract experience, but it’s reliable and it works.

After properly setting up the conditions for game over I started thinking over the scoring system. I set up 4 different threshold: PERFECT!, Good, Meh and Oops; they’re awarded based on where you landed the block in relation to the previous block. If you get a PERFECT! the block actually snaps to align perfectly with the one below.
Unfortunately, though the system was implemented, I couldn’t make the proper effects and UI in time. The result was that the score went up by what felt like a random amount every time you placed a block. So at the last minute I decided that the score would be just how many blocks you successfully placed.

At this point the game was done, but it lacked so much that I couldn’t leave it like that. So, again at the last minute, I tried to give some context to the whole and made an imaginary skyline with ProBuilder. That’s basically the only layer of polish I was able to do, but I think it does a lot.

I’m not mad at how the game turned out, the only thing that I regret is that if I had been able to focus a little bit more on polish and gamefeel it could have been properly good. 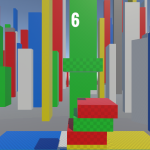 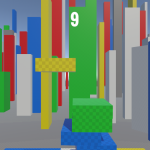 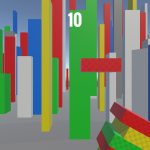